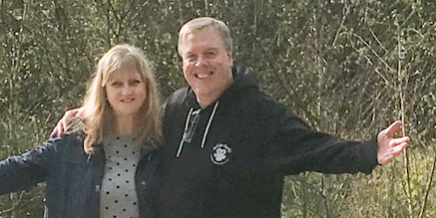 Back in July last year, Derby Hub member and charity me&dee announced its 20/20 vision project. The charity set a target of £150,000 wanting to be able to purchase the Sherwood Hideaway lodge in Nottinghamshire.

Since launching the project me&dee has received overwhelming backing from generous supporters, individuals, and local business owners – as well as Derby Hub!

However, during the COVID-19 pandemic, me&dee’s income dropped by 70% and the charity’s founder Maria Hanson MBE, and charities’ board of directors, feared the dream may never be achieved.

However, two substantial donations have made it a reality!

BNA, a charitable trust in Nottinghamshire, generously donated funding that equates to buying the entire lounge area in the lodge.

Then came news that £7,000 had been raised for the charity via a Just Giving fundraiser organized by 16-year-old Joseph Matin. Joseph is the son of Una, who was the sister of Delia (the ‘dee’ in me&dee). Sadly, Una recently lost her battle against cancer and had asked Joseph to raise funds for me&dee instead of flowers. This contributed to the final payment of the lodge, allowing me&dee to complete the purchase.

Maria commented: “We are over the moon to have achieved our target and now own our very own Forever Home that the families that we help can now enjoy. The generosity from our supporters has been overwhelming and we can’t thank everyone enough for making our dream a reality. With Coronavirus, we didn’t think this would be possible anymore, but those two phone calls changed everything. These final two amounts, as well as the hundreds of businesses and individuals who raised money over a nine-month period, have got us there. We just could not have done it without you all and would never have achieved our dream of our Forever Home, me&dee’s hideaway. Thank you.”

However, it doesn’t stop there! It costs around £400 for each families’ holiday at the new Sherwood Hideaway lodge so me&dee is asking people to consider how they may be able to continue to support the charity going forward.

Maria continued: “We know it is going to be tough as we all head back to normality but we are looking forward to picking up our existing business relationships and look for companies to work with in partnerships. From being charity of the year, to direct debit donations via our Business Club, or purchasing tickets for our annual ball in November – we have plenty of corporate sponsorship opportunities available and would welcome the chance to discuss these with people.”