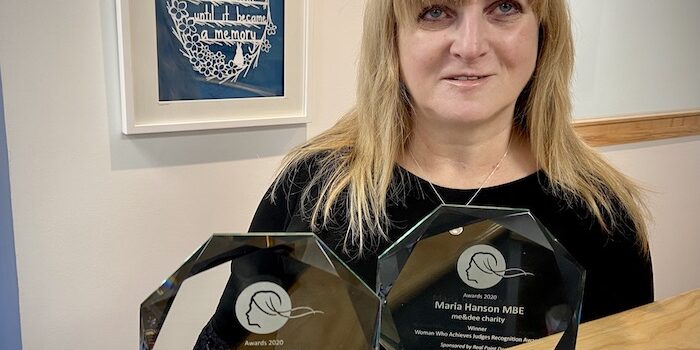 Founder of me&dee charity, Maria Hanson MBE, has been awarded not one, but two, Woman Who Achieves Awards, to recognise the work she does to help families facing short and uncertain futures together, to create special, lasting memories.

The Woman Who Achieves Awards were founded by Sandra Garlick, who received an MBE earlier this year for services to women in business, and who founded Woman Who in 2016 to inspire women in business to recognise and celebrate their successes, achievements and hard work.
Maria’s first award came at the start of proceedings when she won the title of “Woman Who Achieves for a Charity.” Then at the end of the event, which this year was held via Zoom, Maria was taken aback when it was announced that she had won the special Judge’s Recognition Award, which selects the very best finalist from all ten categories and crowns them the overall winner of the afternoon.

Maria commented: “I was absolutely shocked and overwhelmed. Sandra is so motivational and inspirational so to be recognised by her is quite something! It’s been such a challenging year for me&dee, and we’ve overcome some huge hurdles in very difficult circumstances. We’ve been hit so hard and our fundraising plans have already been decimated, so it’s nice to have something to be celebrating!”

Sandra Garlick MBE said: “This nomination really stood out and the judges were blown away by Maria’s achievements. Maria is a true inspiration to everyone – she has achieved so much whilst having to overcome so much on a personal level. Her motto is ‘never give up – move the goalposts but never the goal’ – something we can all resonate with.”

me&dee needs more support than ever as all its events this year have been cancelled due to COVID-19 and some grants it has previously relied on have been withdrawn.
If you are interested in finding out more about how you can help support me&dee please visit www.meanddee.co.uk